Veterans and the legal system: Why it’s not their fault

Veterans from the Iraq and Afghanistan wars are being imprisoned at surprisingly high rates that would appear to be unfitting of the valor and honor they showed during combat. Several questions arise for me: 1) Is the military selecting men and women of low moral fiber who once released from the military structure are more likely to commit crimes? 2) Or, is it possible that the very nature of the work environment (extremely dangerous and volatile) to which active duty military men and women are exposed to creates conditions for continued violence? 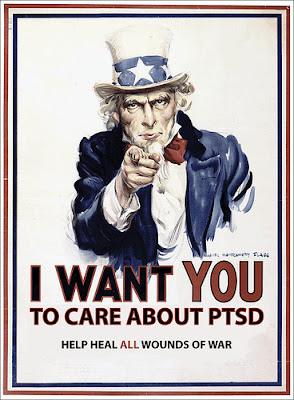 Families of veterans coming back from war could testify to the notion that many soldiers returning from war have difficulty in adjusting to “normal life”. Heck, what is normal life once you have seen numerous soldiers and friends killed in front of you? There is a rising national conscience around Posttraumatic stress disorder (PTSD) in veterans and the impact it can have on their daily lives. Let’s take a closer look at symptoms of PTSD. From the Diagnostic and Statistical Manual (DSM IV-TR):

D. Persistent symptoms of increased arousal (not present before the trauma), as indicated by two (or more) of the following: (1) difficulty falling or staying asleep (2) irritability or outbursts of anger (3) difficulty concentrating (4) hypervigilance(5) exaggerated startle response

Although this is only one symptom set from PTSD criteria, I think it’s quite clear that the symptoms of PTSD create a fertile ground for aggression. Imagine yourself feeling irritable and angry, with decreased concentration, a heightened startle response, and no sleep. No to mention hypervigilance (looking out for danger and threat everywhere) and several years of training in how to hurt people (boot camp, advanced military training, etc.). I think we can easily make the theoretical case that PTSD symptoms match up very naturally to aggressive behaviors.

That is certainly not to say that aggressive acts by veterans are excusable but it does mean that we need to treat vets convicted of crime differently. We need to supply them with mental health treatment and support as opposed to locking them up and throwing away the key. This recognition of unique needs of veterans in the legal system has spurred a new type of court that attempts to supply them with a second chance and the help they need. Its simply called “veterans court.” And its a growing movement throughout the US to better support our veterans in their greatest time of need. Check out the national veterans court website to learn more and spread the word to raise awareness…and forgiveness.