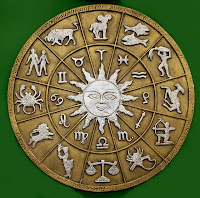 When my birthday rolls around on the calendar every September I often think about zodiac signs. I’ve always been curious about the validity of personality descriptions that come along with the zodiac signs. There is something mysterious and exciting about zodiac signs. Almost…magical. Belief that celestial alignment on your birthday determines personality may be laughable to some, however, astrology has continued to gain popularity in the US through the past 3 decades. Worldwide, countries such as India, South Africa, and Canada are leading the astrology boom.

Astrology has its roots in ancient Babylonia around 600 years B.C. when the 12 zodiac signs were first organized into a horoscope. These signs were derived from the corresponding markers in the sky along the “path of the sun, moon, and planets,” which roughly correspond to the months of the year. Astronomy bloomed out of a pagan society which believed in and worshipped many Gods. For example, if a “planetary omen” such as Mars (the god of war) was bright during the summer then it was a good time to wage war. Or if Venus (goddess of love) was particularly bright, it was a good time to make love (most likely invented by men). As paganism has faded so has the religious nature of astrology. My guess is that many of the present day users of horoscopes and astrology are even unaware of its origins. Regardless, zodiac signs have pervaded popular culture and can be heard at local bars (the WORST pick-up line ever) or found in your local newspaper.

I’m sure that everyone at least knows their zodiac sign and has likely read their horoscope a time or two. Many claim their zodiac sign to describe their personality perfectly. My zodiac sign personality description is even fairly accurate. However, when you take a step back and simply consider the numbers, the likelihood that 12 zodiac signs accurately predicting personality appears highly unlikely. According to the Census bureau the US currently has 300 million people. If that number were divided by 12 (zodiac signs) to get a rough estimate of how many individuals would represent a given sign it would result in 25 million (give or take a million based on more popular birth seasons). That would mean we could somewhat accurately describe the personality style of 25 million people through one zodiac sign!

In addition to the overwhelming statistics of attempting to describe too many people with 12 zodiac signs there have been several quantitative studies looking at the possible links between zodiac signs and contemporary conceptualizations of personality. The best and most recent study is publicly available online. The study samples were drawn from epidemiological sized studies (n= 4,000+ & 11,000+) and were representative of a national sample. I’ll let the study’s authors make their own point:

Our findings on astrology concord in general with the reviews of the research literature (Dean et al., 1997; Eysenck & Nias, 1982). In fairness, the present study cannot falsify astrology at large since the position of planets other than the sun might also have an effect. However, as pointed out by Eysenck and Nias (1982, p. 31 and 49) if there is some truth to astrology then some general effects of prominent astrological factors like Sun Signs should be detectable using large enough samples. The present large-scale study certainly found no independent effects of Sun Signs, Elements, or gender, and thus yields no support for the common claims of astrology.

There you have it…No empirical support for the common claims of astrology such as zodiac sign personality descriptions. So what conclusions can we take from this study?(click read more to see)

My take is that if you love astrology and think your zodiac sign is a perfect description of you. Then, don’t stop believing! As long as you aren’t basing major financial decisions or whom you marry on your horoscope then you’re fine. Why do you think the newspaper keeps publishing horoscopes? Horoscopes are fun and should be treated as such. In my opinion, horoscopes are words of encouragement delivered in a tiny package. Here is my favorite from today’s Seattle Times horoscope page:

Choose the path you really want, even if it seems more challenging. Get expert advice, and follow the rules exactly. Stay cautious and focused, and go for it.

See…it’s like advice and a pep talk all in one.