I came across this “personal essay” on Gawker the other day in which @Moore_Darnell shared some his early life suffering related to physical abuse both inside and outside the home as well as struggles with his own sexuality. His profession these days is being a writer and his eloquence came across nicely in expressing both the pain and insight he gained through these experiences. Clearly a man that has grown tremendously in his understanding of himself and the complex (and flawed) world around him, Mr. Moore shares his first suicide attempt as well as his many prior thoughts regarding that act. 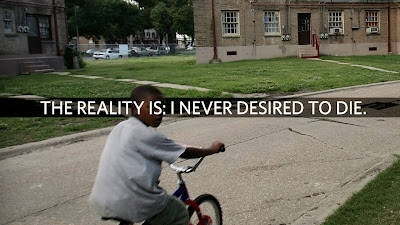 While there are many aspects of this brief essay that are worth examining, I was most acclaimed by his ability to express how he mentally bridged the gap of attempting to kill himself. In reflecting on my own understanding of suicidality, I often return to some of my readings of Freud and his theory regarding life force. My remembrance of those readings was that our will to live is so strong that the death force must be overpowering in order for us to attempt suicide. In other words, it takes an immense conglomeration of pain, trauma, and our own willingness to die to arrive at the door of suicide. I believe Mr. Darnell expressed his process to that point quite well.

To get to that end—a space of peace, and freedom from victimization—I came to the wrong conclusion that I needed to sacrifice myself: to die to at once be free. I did not realize that freedom would not come by way of my death—whether imagined or real—but by the radical transformation of spaces: through the dismantling of ideas and the removal of people who created the “hells” in my life that had me longing for “heaven.” It wasn’t clear to me, like it is today, that by killing myself I would have aided the perpetrators and systems that had been trying to do so for years. I became my own offender, metaphorically preying on myself and carrying the same weapons (not unlike the kerosene and lighter) that some others had used against me years before.

As he reflects back on this time of immense pain in his life Mr. Darnell also expresses his insight in how he became his own perpetrator. The human mind certainly works in mysterious ways, but I have heard (and seen) this strange dynamic in many trauma victims with whom I’ve worked. Whether through suicide or other self-destructive ways, sometimes trauma victims attempt to take back control of their own lives even if it means destroying it. It appears that Mr. Darnell is in a much better place today but it is a strong reminder of the traumas exacted on those in powerless positions. A reminder how we as a society should continue to improve our mental health services and offerings in order to allow people space to heal before they attempt to end their own suffering.
There are crisis lines available 24-7, 365 days a year.
Call 1-800- 273-TALK (8255)
If you’re a U.S. Military veteran they have a dedicated line for you.
Call 1-800- 273-TALK (8255) and press 1

Credit to Gawker.com for picture and excerpt.